70 years of preservation
(The SLS and Gladstone by Bruce Nathan)

On 20th September 1997 members of the Stephenson Locomotive Society met at the National Railway Museum, York, to commemorate the 70th anniversary of preservation by the Society of the London Brighton & South Coast Railway Stoudley "B" Class 0-4-2 No214 Gladstone. This was the first instance of preservation of a locomotive by a private body. Gladstone was built in 1882, went into service at Brighton in January 1883 and was withdrawn in December 1926, after running 1,346,918 miles.

The SLS had been founded at Croydon in 1909 and there was a strong interest in Brighton locomotives among the early members. Therefore in 1926 as many older locomotives were being withdrawn by the Southern Railway, the Society felt that something of the LB&SCR should be preserved and negotiations were put in hand for the purchase of Gladstone.

The then President, J.N. Maskelyne, wrote this item:-

It is with utmost pleasure that, on behalf of the Council, I am able to announce that preliminary negotiations for the celebrated LB&SCR locomotive "Gladstone" are now completed. This engine has been withdrawn from service and is at Brighton works, where the work of restoring her to her original condition and painting her in the famous old yellow livery is to be put in hand immediately. I am sure that all our members will appreciate fully the kindness of the Southern Railway Co. in helping us to carry out such a scheme as this, certainly the most ambitious scheme ever undertaken by our Society. We are, also, deeply indebted to the London & North Eastern Railway Co.. who have offered to find space for the "Gladstone" in their Railway Museum at York until such time as accommodation can be found in London, possibly at South Kensington Museum, in the course of a few years.

There is no need for me to enlarge upon the reasons as to why this engine is being preserved; it is enough if I say here that she represents the unique achievement of an unique Locomotive Engineer whose influence upon Locomotive Engineering generally can still be noted at the present time. That "Gladstone" was a sound proposition in the first place, designed with the utmost care and almost uncanny foresight, is proved by the fact that her term of usefulness has amounted to just forty-four years. From now on she will remain the property of the Society, and I am certain that every member will agree that she is a possession of which we may well be proud, and an asset of which the value will increase with the passing years.

The above was included in the Society's circular of 11 February 1927, followed by an appeal for funds.

On 14 May 1927, Gladstone was displayed in Platform 12 at Waterloo Station together with the then-new 4-6-0 No E850 Lord Nelson. During the subsequent week it was available for inspection to members at Battersea Park Shed before being hauled to York, where, on 31 May, it was ceremonially handed over to the LNER for safe keeping in the old Railway Museum. Gladstone never moved to South Kensington as had been intended and, except for storage at Reedsmouth during World War 2, remained at York.

In 1959 the Society celebrated its Golden Jubilee and it wished to have Gladstone in the best of condition to mark the event. Society Officers visited York to find there was nothing radically wrong with the engine, but it was in obvious need of a repaint. The price quoted by the British transport Commission, which was now responsible for the (old) York Museum was beyond the Society's means and therefore the time had come to offer Gladstone to the BTC with its other historical relics. 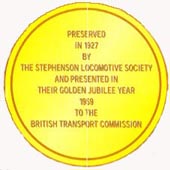 The locomotive was therefore repainted under the supervision of Society members who had researched the accurate colouring and lining used in Brighton days; it was possibly the most accurate restoration of any preserved locomotive in Europe at the time. Gladstone was formally handed over to the BTC at York on 18 September 1959 adorned with a circular plaque mounted on the buffer beam. (See right)

With the transfer of relics from the former BTC, Gladstone became part of the National Collection and was moved to the new National Railway Museum at York when it opened in 1975.

To mark the 50th anniversary of its preservation, Gladstone was restored by the Museum staff and on 28 May 1977, carrying the LB&SCR Royal train headboard and decorations, it was on display to SLS members in the Museum yard together with the Pullman Car Topaz. This was much appreciated although one Brighton diehard remarked that he did not approve of having a Brighton engine coupled to a Pullman Car used on the the South Eastern & Chatham Railway!

Picture (2 Above) Gladstone at the National Railway Museum on special display to mark the 70th anniversary of its preservation. Photo by Bruce Nathan. (Click on thumbnail to view full size image)

Picture (3 Below) Gladstone on the turntable at the National Railway Museum. (Photograph by John New) (Click on thumbnail to view full size image)

Gladstone has since revisited Brighton territory on two occasions. In 1982 it went to Sheffield Park where the Bluebell Railway celebrated the centenary of the Lewes & East Grinstead Railway, and in 1991 it was at Brighton for the 150th anniversary celebrations.

To mark the 70th anniversary of its preservation, Gladstone was moved into Museum Yard and then back inside to the turntable for photo calls on 20th September 1997. What can follow next? Could we celebrate the 75th anniversary of Gladstone's preservation in 2002 by taking it to Waterloo and having it displayed alongside a restored Lord Nelson - the latter having worked from Eastleigh under its own steam?

Bruce Nathan is a former Editor of the SLS Journal - Article and photographs (1) & (2) reproduced courtesy of Ian Allan.